The first mile and a half is failrly moderate.  The last 2 and a half miles are technical and a slightly strenuous.  It is a beautiful hike and completely worth it for both the journey and the destination.  This hike made it in our Top Ten List!

The hike to Ramsey Cascades in the Great Smoky Mountains begins from the Ramsey Cascades Trailhead in Greenbrier. To reach the trailhead from the junction of 441 and 321 in Gatlinburg (Light 3), turn to travel eastbound on 321. Drive 6 miles and turn right into Greenbrier (look for the Great Smoky Mountains National Park entrance sign on the right). This road turns into a gravel road after a short distance. From Route 321 drive 3.1 miles to a fork in the road. Turn left here and cross the bridge, and then drive another 1.5 miles to reach the trailhead. 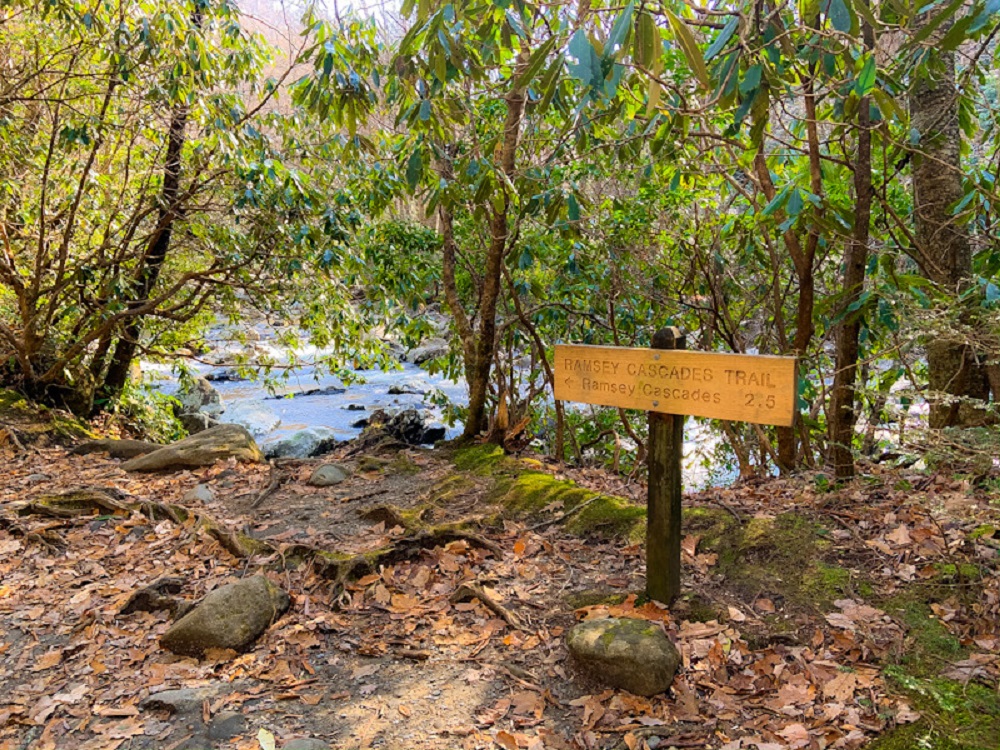 This waterfall in the Greenbrier area has gone by two different spellings. Historically, the park used to spell the name as "Ramsay". However, in more recent publications, and on their website, the park is now spelling it as "Ramsey". The revised version properly reflects the correct spelling, since the cascades are named after the Ramsey family that once lived in this area.

The Ramsey Cascades Trail gains almost 2200 feet in elevation over its four-mile course, and is considered to be a moderately strenuous hike. However, hikers should note that the trail travels over some extremely rugged terrain over the last third-of-a-mile or so, making this a fairly difficult hike. Despite this, the waterfall is still a very popular destination, and you should expect to see a fair amount of hikers along the route during peak tourist seasons.

The beginning of the Ramsey Cascades Trail follows the remnants of an old gravel road. At 1.5 miles from the trailhead you'll reach an old cul de sac, which marks the end of the old roadway you've been following to this point. This location also marks the junction with the old Greenbrier Pinnacle Trail, which used to lead hikers to the top of Greenbrier Pinnacle where an old fire tower once stood. The trail, however, is now overgrown and is no longer maintained by the park. From here the Ramsey Cascades Trail continues towards the east as a narrow footpath.

Hikers will soon enter the largest old-growth forest remaining in the Smokies. One of the primary reasons the national park was created was in response to the damage being done to the ancient forests by the logging industry. This forest was one of the few to remain mostly unscathed. According to the Eastern Native Trees Society some of the largest trees in the park are located on this trail, including the third tallest red maple in the park (141 feet), the second tallest white oak in the park (123 feet), and the tallest black cherry in the park (146 feet). Over the course of the last 2 miles hikers will also see some very large tuliptrees, eastern hemlocks, basswoods, silverbells, and yellow birches.

This portion of the route follows the Ramsey Prong of the Little Pigeon River, which drains off of 6621-foot Mount Guyot, the second highest mountain in the Great Smoky Mountains. There are countless waterfalls and rapids that line the stream, which are intermittingly interrupted by cool clear pools of water.

At just over 2.1 miles hikers will reach a very long and narrow footbridge, which spans roughly 20 feet above the creek (see photo above). It's possible that this could make some people with a fear of heights a little nervous.

As mentioned above, over the last third-of-a-mile or so the trail travels over a very rugged and strenuous stretch. Hikers will have to climb several steep rock steps and navigate through numerous roots, rocks and boulders.

At 4 miles from the trailhead hikers will finally reach Ramsey Cascades, the tallest waterfall in the park, as well as one of the most spectacular. Water drops roughly 100 feet over several tiers, and collects in a small pool where salamanders are often found.

The park website warns that hikers shouldn't attempt to climb rocks near any waterfall, as several people have been killed trying to do so. To drive home the point, a sign at Ramsey Cascades also warns that four people have died climbing on the rocks here. One other caution for hikers during the summer months: watch out for hornets' nests hanging over the trail at roughly eye level, and looking like large gray paper balls.